What happens when two inexperienced entrepreneurs get millions in Venture Capital funding? Sometimes it ends up with premature scaling and near-death experience, as in the case of Addwish. 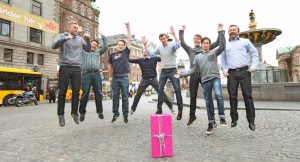 initially a wish list solution for consumers and online stores that allowed users to manage the registration and purchase of gifts. The company was started by Brian Petersen and Kasper Refskou Jensen as a side project, which both worked on part-time. The two co-founders had managed to sign up a hundred web shops and had a total of 20,000 users who had tried their service. In early 2013 the company received a €1.5 million seed investment from venture capital fund Sunstone. Now the goal became to do an international rollout – very fast.

For the first year we had a goal of one million consumers on the wish list – a 50-fold increase! This meant a fast ramp-up from two part-time employees to 12 full-time employees during Christmas 2013. We also started to spend heavily on marketing, including some heavy Adwords campaigns for user acquisitions in the US. This led to a sharp increase in burn-rates, which rose to €100,000 a month. The initial strategy was to build a critical mass of consumers (who use the wish lists for free), and then monetize on the web-shops.
We just didn’t manage to reach those figures. For the first year we got 100,000 consumers – a huge growth, but only 10% of projections. So since the revenue stream from the web shops was still not in effect, this slower-than-anticipated growth was critical.

But the worst part was that we didn’t recognize until way too late we were heading in the wrong direction. We had lost our objectivity during the rush for the Christmas season peak. Despite so many clear signals of low traction in the consumer market and being unable to achieve the key performance, we didn’t realize we were dying until we were actually dead! We woke up way too late, when we had only just made the initial entry into selling and revenue generation, resulting in the company being on the brink of bankruptcy by January 2015.

I guess this is what happens when two inexperienced entrepreneurs receive too much unrestricted funding. With too little guidance and supervision, we entered into a-way-too-high burn rate resulting in only one option: go big or go bankrupt.

In perfect hindsight, it’s easy to see what went wrong: we started scaling before we had reached a product-market fit. A wish list did not have a viral loop that was fast enough to meet our goals. When you share something on Facebook it triggers the recipients to share it again straight away. But when you share a wish list, the recipient may like the product, but they don’t need to create their own birthday wish list at that exact moment, which is why the sharing and viral metrics take a lot longer. We were blind to this at that time. If we had noticed it in earlier, we could have changed strategy before it was too late.

Unlike most cases of premature scaling, this one ended well. Before going bankrupt, the venture capital fund sold its shares to a local business angel, Niels Henrik Rasmussen, who injected more capital into the company to keep it afloat. Admirably, the VC initiated and supported these changes in order to help the business survive.
With the new owner also came a new and improved turn-around strategy, now focused on building the B2B segment first. The company was able to become early-stage positive within seven months due to a rapidly growing customer base of 400+ e-commerce businesses.

Our turnaround made us focus on what we did really well: approaching the business segment (web shops), and making use of the technology that brings them higher conversion rates and larger basket size. If we were to do it all again, we would do it very much like we do today: “identify – test – adjust”.

Perhaps what you think is a goldmine, might not be. It’s essential to test out every initiative, being truly honest with yourself about the results. It may not be a bad idea, but perhaps the audience is not ready for it, the tech is not there yet or the adoption triggers are not present. But get the right people and make sure they see the vision as you do, and you will eventually find a way. Now that we are mainly focusing on the B2B segment, it’s quite funny to see that our wish list, two years after our big launch and missed KPIs, has gotten more air beneath its wings. This time, without any marketing-related initiatives, we can see that the 100,000 users have more than tripled, and that social sharing is slowly becoming our main acquisition channel for wish list users. Now we have also included the wish list data in our intelligent data analysis for even better personalization in our business offering. In some ways you can say that we have gone full circle – just the other way around.