How do you get investors to trust you?

For any investor to invest in a startup, they need to have a lot of trust given the scary statistics on how many startups fail.

You can even divide this trust into two things the investor must believe in: trust in the business opportunity (that the problem you are trying to solve is real, that the market is big enough etc.), and trust in your team (that you have what it takes to deliver on the opportunity).

But there is a big difference between early- and late-stage startups when it comes to how trust is generated.

If you’re a late stage startup, you have a product, users, paying customers and revenue, and a team that have delivered the above. What this means is you have a lot of historic data, that is both quantitative and qualitative, to support your claims. You are able to provide credible answers to tough questions like: What is the cost of getting a customer? How much are they willing to pay? and How big is the market? Real data beats every scenario analysis there is. If you have customers paying, that is proof – and proof generates trust. Of course, they still have to have trust in you and the team, but it’s relatively easy to convince investors about the business because you have real data.

But what about an early-stage startup? You might have a beta version of the product, maybe you have some users, but you probably don’t have paying customers yet. You’ve hopefully convinced a few people to join you, but it’s likely to be an incomplete team. You have very little performance data; it’s all about the future. You’re saying, ‘I think there’s a big market; I think my customer would pay for this cool product if I made it.’

If it’s all about trust, how do you get early-stage investors to trust you?

There are two different types of investors: those you already know, and the rest. Perhaps you have an acquaintance, or friends and family, who know you and have the means to invest in you. Great, they know you and therefore trust you (and, if they don’t trust you, perhaps you should look in the mirror). Most startups will have to go beyond their personal network and approach investors they  don’t know at some point. When they do, they will need to build trust. The key point here is that trust is built over time. You’re unlikely to trust a person you have met for half an hour. This explains why you can’t expect to get the money on the same day
you meet a potential investor – there’s no personal trust. Even if they think you’re cool, feel you have what it takes, and you have a great business, the chance you’ll get money the same day or the day after you meet is tiny. 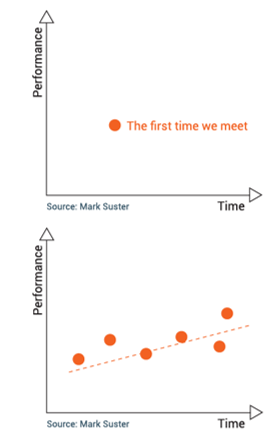 Entrepreneur turned venture capitalist, Mark Suster, from Both Sides of The Table, said, I don’tinvest in a dot, I invest in a line.

Imagine yourself as a dot on a graph with performance on the y versus time on the x. Even if your performance at a given time is good, investors want to see a line so
they can see you at different points in time. Investors look at entrepreneurs they heard about six months ago who had great plans for the future, and when they meet
six months later they may see they’re still not quite there yet but the line is going in the right direction.

As Lars Andersen, General Partner in SEED Capital, explains: The most common mistake startups make in relation to contacting VCs is that they make contact too late. Seriously, it’s about sticking your neck out there. Your product doesn’t have to be perfect. Build a minimum viable product, use it to learn about your customers, and start contacting VCs. We might say that it’s still too early, but that doesn’t mean never. The now successful wine scanner app, Vivino, had a first productthat was absolute crap, but they gave us something to work from.

This creates a paradox for many startups. You should not count on VC money too early since in reality they invest rather late in the process, but you need to begin building relationships with them early on. They need time to get to know you before they invest their money – just make sure you don’t waste too much time
on coffee with VC partners!

What does this mean to startups? You have to build relationships with potential investors before you need the money – you shouldn’t wait until you have everything in place. Create relationships now.

How to get funding for your startup

Presentation on how to get funding for your startup

In September 2017 I gave a presentation at Loftet Studentincubator (student-run incubator) in Oslo, Norway on how to get funding for your startup.

My advice to the students can be summarized in the 10 step method to finding investors for your startup:

You can download my presentation from the event via the following link: How to find investors for your startup.

Case Study: LAVO app – Know your customers and get the right people on board.

LAVO is a mobile app in the social media domain. Users set, follow and respond to video ‘challenges’, where they capture exciting moments and add music to bring their footage alive. Founded in 2015, the Norwegian company bootstrapped until the first angel investment round in 2016.

“I had an idea around live streaming for a younger target group, where the consumer behaviour was constantly changing and the content needed to be cool. The product evolved into a challenge app, where publishers and the audience can interact, share, stay up to date and have fun together.

We bootstrapped initially, and the first investors came from the Bergen Angel Network in September 2016. The network consists of 40-50 early investors and five of them wanted to join the team, investing a total of NOK 2 million in that round. Since then things have moved fast.

The second seed round was done with help from a small advisor team in Oslo, Eikeland & Ravnaas, who put us in contact with Tom Erik Kjeseth, an award-winning film producer. He wanted to join the company because he liked the way we were working with floating media, film effects and music. Kjeseth also invested NOK 2 million and is now very involved helping us build our creative strategy.

The last seed round was closed with top-notch investors – big real estate owners in Oslo. Brothers Øystein and Torstein Tvenge are among the most successful investors in Norway, investing mainly on the Oslo Stock Exchange but also investing in startups where they see a huge potential, as they do in Lavo.  They were so bullish in the first meeting, I thought they wanted to buy the whole company! However, we secured the cash needed, NOK 8 million (approximately $1 million).

I think a lot of our success comes down to understanding our customer. I talked with two important organisations who represent LAVO’s target group. We conducted workshops to learn about their behaviour, needs, trends, what´s cool, what topics are important, and other patterns and I learned a lot about the type of product LAVO could be. We also spoke with a Norwegian TV channel who wanted a product that gave their audience more interaction, which gave me more drive and motivation to fine-tune LAVO.

As the product evolved, I questioned just about everyone: producers, content creators, talent, and musicians, until LAVO had a perfect place in the middle of the matrix.  We challenge content producers to interact with their audience and at the same time the audience is more involved than ever before. We are adapting to changes in user behaviour, and the investors see this as the way forward.

I would say that the most important thing we’ve learned is to work with good and smart people who believe in you and what you are doing.  This also means getting the right investors.  Our investors have delivered both hard capital and intellectual capital, as we expected.  As a startup you are often good at the product or service the company provides, but growing the company constantly, raising funds, is beyond your full control. So getting on board investors that know that part of the game, and that can also participate in many rounds of early fundraising, is important.

In Norway, we have few environments that specialise in startup-funding. It’s too early for the investment banks and most of the venture funds so you rely on rich angel investors. Luckily, I managed to get advisors on board who knew many of them, and who liked Lavo. Now they have all been taken on one hell of a ride!”

It never works like this in the real world. Ever. Business angels need to evaluate not only the idea but also the people behind it and the traction (how far they’ve come); in other words, all that’s needed to build the necessary trust in the business and founders, on which all angels build their investment decision. This can’t be covered in 15 minutes. It makes great TV, but it’s not real!

I am not suggesting the deals made on TV are fake – they are real, and it makes sense for the angels to do the deals on stage, given the huge publicity it gives them which more than pays for the additional risk of investing in unknown companies. But in the real world you can’t get funding after a 15-minute meeting with the business angel!