A common mistake is for entrepreneurs to send their 50-page business plan to 30-something
investors and then sit back waiting for them to call and invite them to pitch.

But before you send out any material, you need to get the trust of a potential investor. They get hundreds, if not thousands, of contact requests a year. Every entrepreneur thinks they have the best idea
or they wouldn’t be doing it. But why should a busy, time-strapped investor speak to you? What’s in it for them?

So what SHOULD you do?

This I’ve written a 10-page post on, which is the chapter on how to contact investors in the Startup Funding Book.  In this post I explain how to:

You can download it as a PDF-file via this link.

How to convince a business angel to invest in my startup?

Many founders are for good reasons going to business angels for startup funding. Most have however very limited knowledge about business angels and how to convince angels to invest in their startup.

That’s why I in the Startup Funding book dedicated a 17-page chapter to business angel funding.

I have decided to give away the chapter for free (PDF). You can download the business angel chapter via this link: Business Angels – Startup Funding Book

The key take-away points from the business angel chapter:

Case Study: LAVO app – Know your customers and get the right people on board.

LAVO is a mobile app in the social media domain. Users set, follow and respond to video ‘challenges’, where they capture exciting moments and add music to bring their footage alive. Founded in 2015, the Norwegian company bootstrapped until the first angel investment round in 2016.

“I had an idea around live streaming for a younger target group, where the consumer behaviour was constantly changing and the content needed to be cool. The product evolved into a challenge app, where publishers and the audience can interact, share, stay up to date and have fun together.

We bootstrapped initially, and the first investors came from the Bergen Angel Network in September 2016. The network consists of 40-50 early investors and five of them wanted to join the team, investing a total of NOK 2 million in that round. Since then things have moved fast.

The second seed round was done with help from a small advisor team in Oslo, Eikeland & Ravnaas, who put us in contact with Tom Erik Kjeseth, an award-winning film producer. He wanted to join the company because he liked the way we were working with floating media, film effects and music. Kjeseth also invested NOK 2 million and is now very involved helping us build our creative strategy.

The last seed round was closed with top-notch investors – big real estate owners in Oslo. Brothers Øystein and Torstein Tvenge are among the most successful investors in Norway, investing mainly on the Oslo Stock Exchange but also investing in startups where they see a huge potential, as they do in Lavo.  They were so bullish in the first meeting, I thought they wanted to buy the whole company! However, we secured the cash needed, NOK 8 million (approximately $1 million).

I think a lot of our success comes down to understanding our customer. I talked with two important organisations who represent LAVO’s target group. We conducted workshops to learn about their behaviour, needs, trends, what´s cool, what topics are important, and other patterns and I learned a lot about the type of product LAVO could be. We also spoke with a Norwegian TV channel who wanted a product that gave their audience more interaction, which gave me more drive and motivation to fine-tune LAVO.

As the product evolved, I questioned just about everyone: producers, content creators, talent, and musicians, until LAVO had a perfect place in the middle of the matrix.  We challenge content producers to interact with their audience and at the same time the audience is more involved than ever before. We are adapting to changes in user behaviour, and the investors see this as the way forward.

I would say that the most important thing we’ve learned is to work with good and smart people who believe in you and what you are doing.  This also means getting the right investors.  Our investors have delivered both hard capital and intellectual capital, as we expected.  As a startup you are often good at the product or service the company provides, but growing the company constantly, raising funds, is beyond your full control. So getting on board investors that know that part of the game, and that can also participate in many rounds of early fundraising, is important.

In Norway, we have few environments that specialise in startup-funding. It’s too early for the investment banks and most of the venture funds so you rely on rich angel investors. Luckily, I managed to get advisors on board who knew many of them, and who liked Lavo. Now they have all been taken on one hell of a ride!”

It never works like this in the real world. Ever. Business angels need to evaluate not only the idea but also the people behind it and the traction (how far they’ve come); in other words, all that’s needed to build the necessary trust in the business and founders, on which all angels build their investment decision. This can’t be covered in 15 minutes. It makes great TV, but it’s not real!

I am not suggesting the deals made on TV are fake – they are real, and it makes sense for the angels to do the deals on stage, given the huge publicity it gives them which more than pays for the additional risk of investing in unknown companies. But in the real world you can’t get funding after a 15-minute meeting with the business angel! 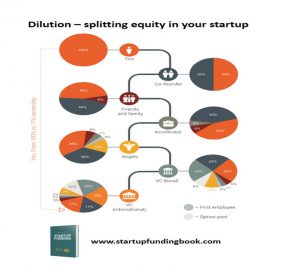